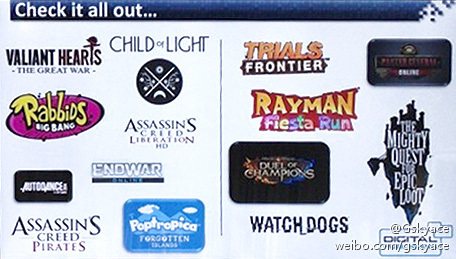 The rather low quality image above has leaked, listing the upcoming titles that Ubisoft will showcase at their Digital Days event, including a new Assassin’s Creed game, an HD version of the PS Vita title and even a new Rayman game.

This seems legitimate and quite likely, with confirmed titles Might & Magic: Duel of Champions, Panzer General Online, Poptropica: Forgotten Islands, The Might Quest For Epic Loot, Trials Frontier and Watch Dogs making appearance in among the new.

So, we’ll start with the ones we can speculate on: Assassin’s Creed Liberation HD will no doubt be a PS3/PC/360 port of the Vita title, and Rayman Fiesta Run will be another running game for iOS, similar to Rayman Jungle Run. We’ve heard a little bit about Child of Light before, and EndWar Online will probably be a free-to-play version of the strategy game to combat EA’s Command & Conquer. Autodance II will be a mobile Just Dance spin-off.

Now, the others are quite interesting, as we have no idea what they could be. Assassin’s Creed Pirates could be a mobile spin-off, or maybe another Vita game, while Rabbids: Big Bang could be anything involving the Rabbids. I have no clue what Valiant Hearts: The Great War could be, however.

What do you think of the titles? Speculate in the comments below.

PlayStation drops out of PAX East over COVID-19 coronavirus concerns