Ever wondered if your job was worth it? Ever felt like the amount of stress you go through for people who are making more money than your already healthy wage was really, truly worth it? For Serge Foucher, a Chief Executive for Sony, I think the time has come to ask himself that question.

Sony’s videotape plant in the south-west of France was one of the many branches of the company that, aside from making out of date media, had been in the firing line due to recession cutbacks. More than 300 workers had to be let go and as a last courteous gesture Serge visited the plant to bid his farewell.  If he expected to be greeted with humble applause and sandwiches he would have been deeply shocked. 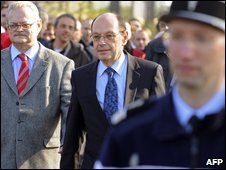 When a person’s right to earn a living is unfairly ripped from them it is only natural they respond in an aggressive manor. It’s preservation 101. Unhappy with Sony’s offer of a lesser severance package than elsewhere in France, the staff of the plant decided to take matters into their own hands and locked Serge Foucher in the plant, barricading him in over night.

What else could they do? “He won’t listen to us, we didn’t find any other solution” other than forcing him beyond his will to spend the night in captivity? What, did he stand there with his fingers in his ears saying ‘la la la la not listening’?! Why didn’t they flush his head down the toilet? That usually gets the answers you’re looking for.

Well, you’ll be pleased to hear that in the morning some of the tension has subsided and their master plan worked. They all agreed to settle this in a meeting with the unions and get this whole thing sorted. Let’s hope that goes off without a hitch…

I sincerely hope Serge used that time to think about his life and learn his lesson. He’s been a very naughty boy.