ShopTo have stated they will have some PlayStation 5 consoles on sale today and are trying to mitigate the issues they have with their website which just crashes as soon as the have consoles for sale.

You can try your luck here at ShopTo.net. 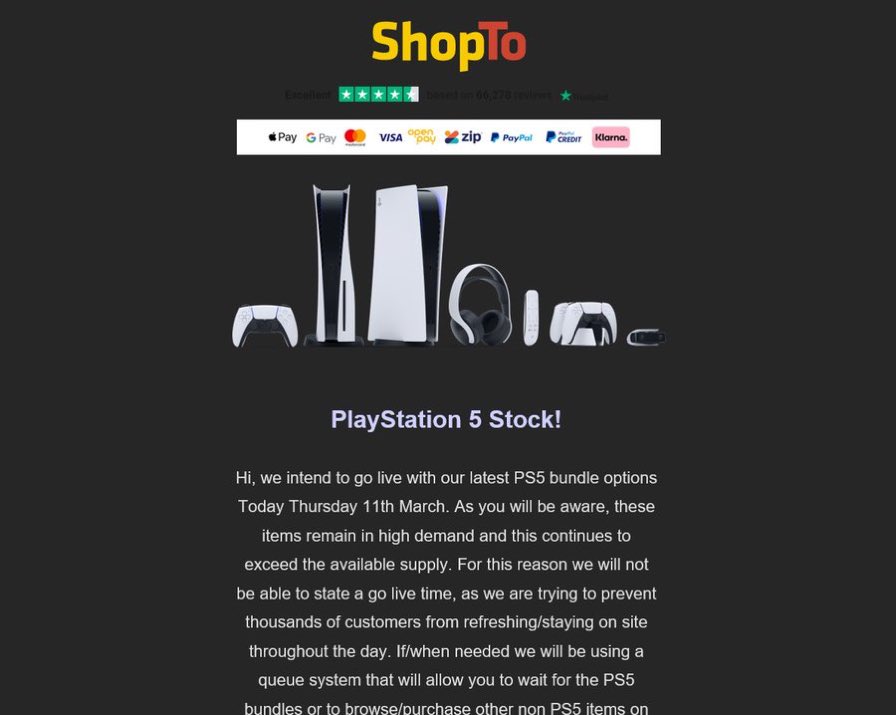 Queue for the queue!

GAME dropped some PS5 consoles earlier this morning so it seems like retailers have got a fresh batch of hardware. GAME may be releasing more consoles later today so you might like to keep an eye on their website.  ASDA have also been releasing consoles so you might also find a few on John Lewis, Currys or other sites.

The scarcity of PlayStation 5 consoles in the UK (and other parts of the world) has been a recurring news story and if failing to secure a PS5 wasn’t frustrating enough, prospective console owners have been left enraged by scalpers looking to flog them at a much higher price on marketplaces such as eBay, Facebook, and Gumtree.

A debate surrounding the act of scalping – and, more crucially, the use of bots to automatically order consoles and other expensive tech – has been called for by a number of UK Members of Parliament (MPs).

In a nutshell, they wish to block “the resale of gaming consoles and computer components at prices greatly above Manufacturer’s Recommended Retail Price”, to “[deny] unscrupulous vendors the chance to make themselves vast profits at the expense of genuine gamers and computer users, while also deterring fraudulent cybercriminal activity,” reports VGC.

In their motion, these MPs also wish to outlaw the use of automated bots which have been employed by individual scalpers and syndicates to jump retail queues. They propose legislation that mimics that surrounding the resale of concert and event tickets.

While much of the focus has been on the PS5 launch, scalpers have also targeted Microsoft’s Xbox Series X|S consoles. Even in September, when the PlayStation 5 pre-orders had just gone live, scalpers were attempted to sell their reserved console for as much as £1,500.

With more consoles coming into stock soon, scalpers will start to peel away from these new consoles but there have been many gamers (as well as their family and friends) having missed out on getting a PS5 in time for Christmas.

PlayStation 5 Guides and more from TheSixthAxis