Here’s a little surprise to perk up your Wednesday morning. Dragon Age: Inquisition, the third title in BioWare’s role-playing series, is will include online multiplayer for up to four players.

It’s a strictly co-op affair, largely inspired by the success of Mass Effect 3’s own multiplayer offering. In essence, players can rally together to take on dungeons, mowing down enemies and grabbing loot along the way. 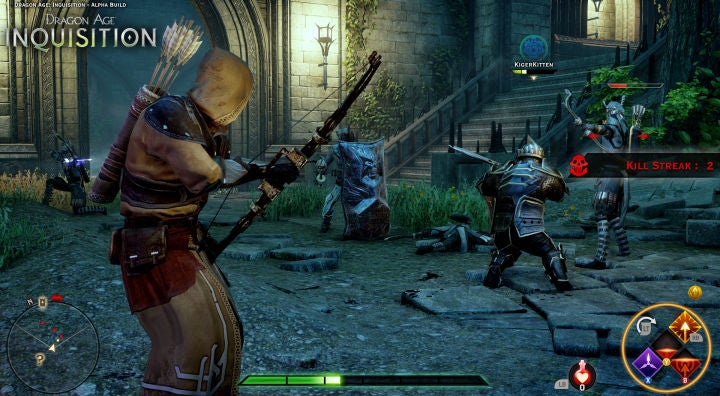 Much like Mass Effect 3’s wave-based shooting galleries, players will select a semi pre-defined character, each one hailing from the warrior, rogue, or mage archetypes. Each of these agents of the Inquisition has their own distinct playstyle, mirroring the progression options available throughout the singleplayer campaign.

BioWare has confirmed that whatever you do in multiplayer strictly exists in that online environment. Whatever crossover there is with the main game won’t affect your singleplayer progression or the outcome of the story.

As mentioned before loot is a big focus in multiplayer. While dungeon crawling you will find all sorts of equipment and materials that can also be used in crafting. Even if the loot isn’t much use to your character, you can always keep it and then switch to another during your next dungeon crawl.

Another feature making its way over from Mass Effect 3 is the online store. BioWare stresses that there is absolutely no pay-wall here, meaning anyone can earn top-tier gear without having to actually spend real money. In short, if you have a few quid to spare chances are you’ll be on the fast track to better loot.

With much of the snobbery surrounding add-on multiplayer having dissipated over the past few years, this latest offering could certainly give Inquisition an edge going into the end-of-year free for all.