Ubisoft have announced that their flagship first person shooter, Tom Clancy’s Rainbow Six Siege, will be free to play this coming weekend on all available platforms.

If you’ve been hankering for a more tactical team-based online game then there’s no better time to pull the trigger, Siege opening its doors to everyone from tomorrow, June 11th, through til the 15th. This includes PC, PlayStation 4, and Xbox One players.

This isn’t a stripped down version of the game either. Those who participate in the free weekend will have full access to the core game and its original lineup of Operators, as well as all of the maps, equipment, and other features added to Siege over the years.

Despite Ubisoft’s shooter having expanded massively since its somewhat shaky launch, there’s honestly no better time to get involved. The growing roster of playable Operators may seem daunting at first yet Siege is still a relatively straightforward game to pick up and enjoy as you gradually peel back those more tactical layers.

Ubisoft have posted a handy Q&A breaking down exactly what to expect from the free weekend, here’s a quick summary including the global start times as shown in the image below. 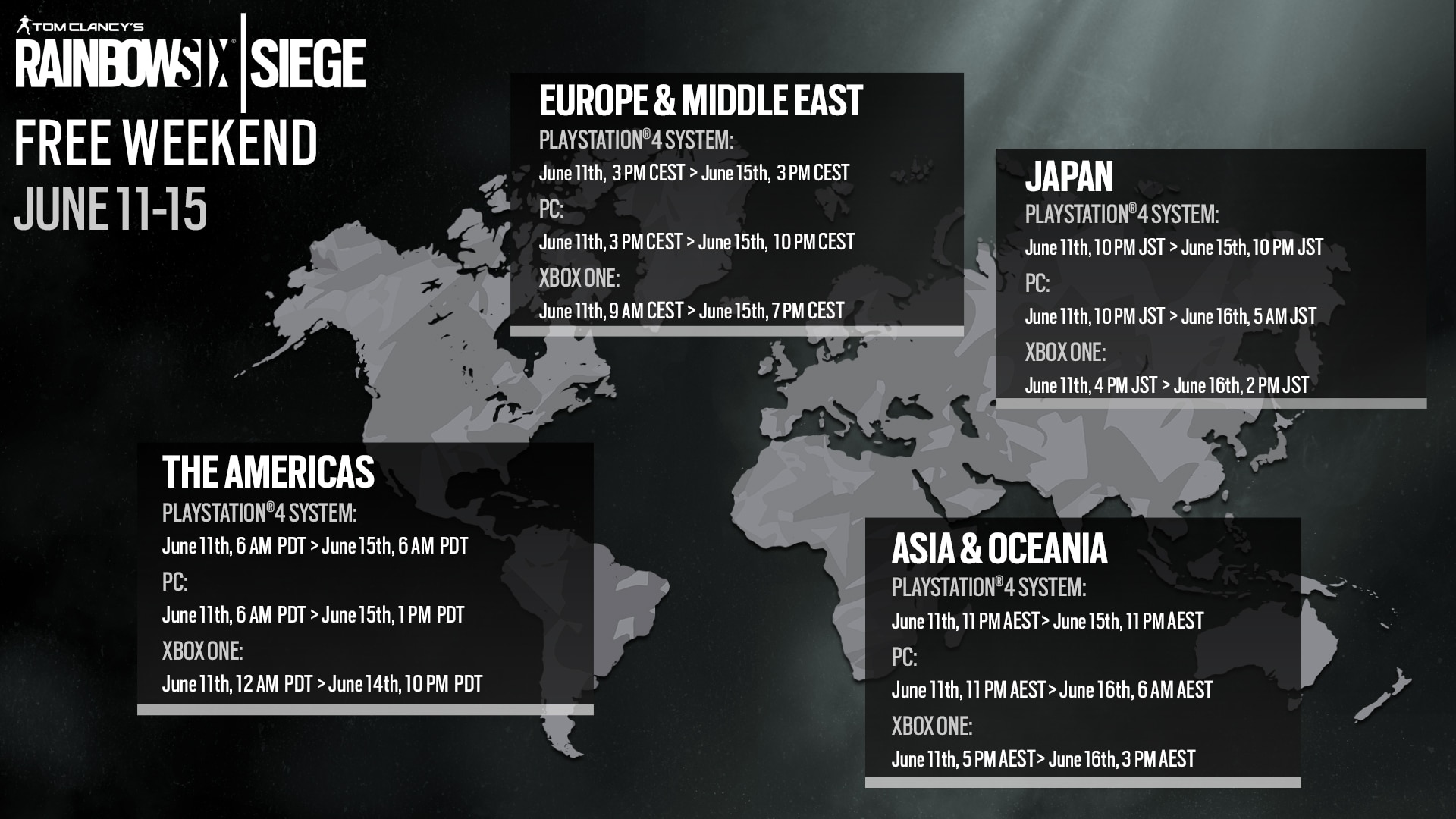 Preload is available right now though the Siege free weekend won’t be playable until the time indicated. As previously mentioned this version of the game will include all base Operators as well as all the maps and content from post-launch seasons. To find the download for this temporary free to play version, here are some instruction per platform:

PC: Click on the PC link above or go to your Uplay PC Launcher.

PLAYSTATION 4: Find the game on the PSN Store or click the PS4 link above, and click on the “Try free Demo” button located next to “Add to Cart” button.

XBOX ONE: Click on the Xbox One link above or check your Games with Gold section.

Rainbow Six Siege is currently gearing up for its Year 5 Season 2, Operation: Steel Wave. This free content update introduces two new playable Operators Ace and Melusi as well as a rework of fan favourite map, House, among other changes.

In other Siege news, upcoming unannounced content for the game (including the rumoured Splinter Cell event) was leaked.