There’s already your bog standard edition, a Commander edition and even the hilarious Wub Wub Dubstep Edition, but the latest Saints Row IV collectors package really is taking the proverbial, even for the Saints.

The Saints Row IV: Super Dangerous Wad Wad Edition (Million Dollar Pack) is, as you’d expect, limited to a single unit, and is being advertised by GAME. 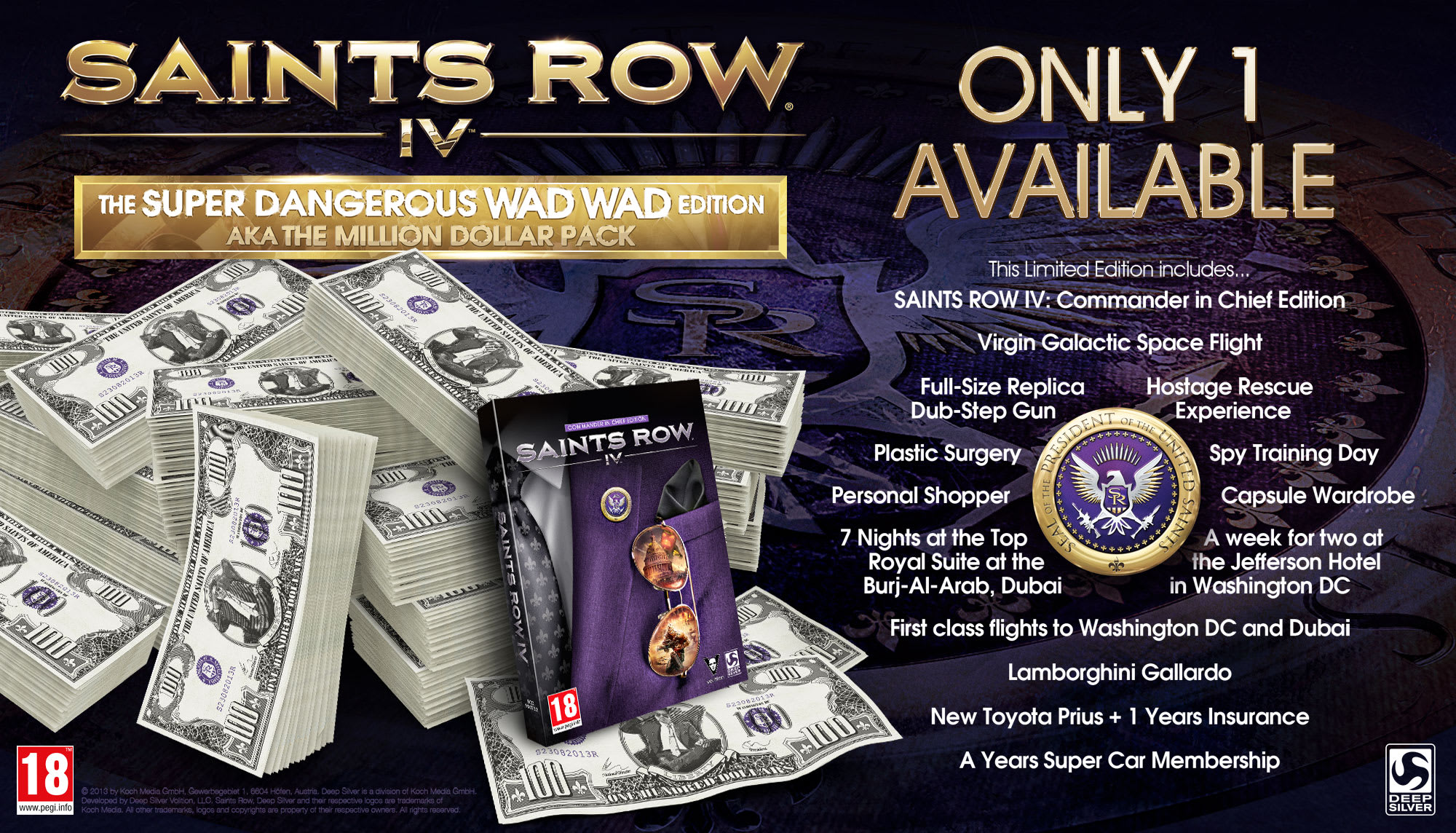 As you can see, the package includes a fair few bits and bobs, but how much is all that really worth? After speaking with Saints Row PR, and being told this bundle was indeed “a legitimate special edition” I took it upon myself to investigate.

First things first, the package obviously contains a copy of Saints Row IV – and it’s the Commander in Chief Edition no less – that’ll set you back £30 via Amazon, and since we were all buying that anyway, that’s only another £646,466 to find down the back of the sofa. Seems reasonable.

The only other exclusively Saints related item in the package is the replica Dubstep Gun, which, from what I can tell, is exclusive to another of the game’s special editions. That one will set you back £90, but includes a Johnny Gat statuette and other tidbits. Deducting those items, I’ve put an assumed value of £30 on the noisy plastic keepsake.

Now, on to one of the more eccentric items – the “bespoke” plastic surgery. According to sources, the most requested forms of comestic surgery are Lipoplasty, Rhinoplasty, and Breast Augmentation. Each of these procedures are commonplace and could cost somewhere in the region of £3,000, for what is considered an average treatment. Let’s take all three.

Naturally, to go with that new body, you’ll need a new wardrobe, and that’s no problem, a personal shopper will fit you out with a capsule wardrobe any Z-list celebrity would be proud of. Having been to one or two gamer conventions, however, it’s clear to me I’m not the only average Joe who favours a hoodie and sweats whilst playing.

Not entirely sure the value of this one – and I’d suggest TSA fashionista Tuffcub could blow a considerable wad on one pair of jeans – but let’s guestimate £10,000 here, just to be generous.

Then there’s the holidays. Can you get tailored mankinis?

The Saints Presidential PR will be sending you for seven nights in Dubai’s Burj-Al-Arab at a cost of £103,360, followed by seven nights in Washington DC’s Jefferson Hotel at a further £3,600.

Oh, right – there’s a third ‘holiday’, but it’s more about the flight than the destination – A Virgin Galactic suborbital space flight, to be precise. Did I mention Saints Row is a little bit mental? I can’t comment on the leg room, but I hear the views are to die for. £160,150.

Once you’re back on terra firma, a couple of experience days are thrown into the mix, each costing £125 or so online, so if you fancy being a soldier or spy, you’re covered. Tinkers and Tailors need not apply – unless they’re making that mankini.

Finally, for those who have a real need for speed, there’s also a supercar bundle comprising a brand new Toyota Prius boasting a monumental top speed of 112mph, and the latest little runaround by Lamborghini, a Gallardo Spyder Performante.

Fully specced, the former costs somewhere in the region of £35,000 including the insurance, with the latter a far more acceptable £186,600 on-the-road. If neither of those cars tickle your fancy, an annual unlimited Supercar membership which grants access to track days throughout the UK is also included, at a retail of roughly £10,000. Phew.

Let’s do some sums, shall we? Using the above information, and today’s Google exchange rate, the total “value” of the Saints Row IV: Wad Wad Edition is far from its purported million dollars – with the contents costing a mere £525,020, some £121,476 short of its £646,496 asking.

I’m sure you’ll agree, that’s a whole lot of crazy for your money, but, alas, not nearly enough.

Saints Row IV is released for PlayStation 3, Xbox 360 & Windows PC next Friday, August 23rd, and you can read Blair’s review of the game right here.