Following on from the brand new game footage shown earlier this morning Ready At Dawn – developers of PlayStation 4 exclusive The Order 1886 – have taken to the PlayStation Blog to reveal the games worldwide release date, along with other info regarding collectors editions and a pre-order bonus.

The Order: 1886 will be launching worldwide on February 20th, 2015, and we’re told customers who pre-order from “a participating retail store” or PSN will receive the Knight’s Arsenal DLC pack as a thank you; This includes both the Red Lightning Pack and the Arsonist Pack – a couple of new outfits and weapons.

As is now customary with any AAA release Ready At Dawn are also making both a Collector’s and a Premium Edition of The Order available at retail, priced up at $80 & $150 respectively. 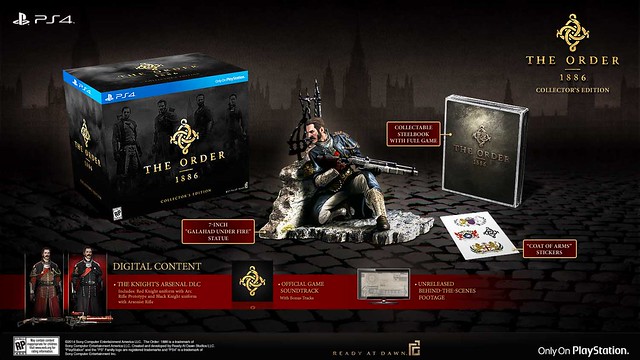 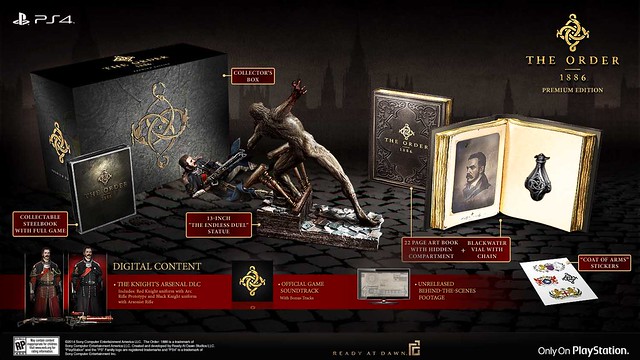 Both editions feature statues that depict Galahad in the midst of combat, either behind cover in Whitechapel or head-to-head with an Elder Lycan in the London Hospital, and also come with Steelbook cases and bonus digital content, including access to the games digital soundtrack.

The Premium Edition also comes with a replica of the Blackwater Vial used in game, which comes hidden inside a special art book featuring exclusive illustrations from the game.