Amazon have listed a new collection of Spider-Man movies, six discs in all with both a blu-ray and 4K UHD disc for Spider-Man: Far From Home, Spider-Mam: Homecoming, and Spider-Man: Into The Spider-Verse . That’s not unusual, these sort of collections pop up all the time but what is different about this one is it’s branded with the PlayStation 5 logo. 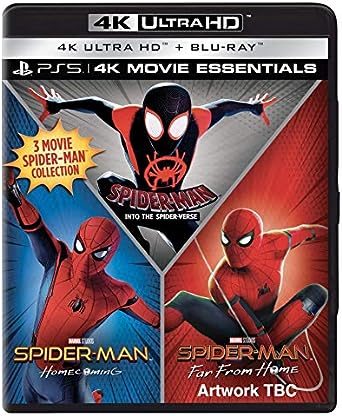 The new product seems to be part of the “PlayStation 5 4K Movie Essentials” line from Sony Pictures, we would assume that other movies will be joining the line in the near future. Sony created the blu-ray format which was a key selling feature of the PlayStation 3 but was slow to take up the 4K UHD format. However, now the disc based PlayStation 5 will ship with a 4K blu-ray drive Sony have clearly seen an opportunity to flog a few movies.

In other Spidey news, with the announcement of a Marvel’s Spider-Man remaster for PS5 last week Insomniac have understandably been bombarded with questions from fans curious about what this means for the game.

In answering those questions, it’s been clarified that no, you won’t be able to transfer a save file from the original PS4 version of the game, but you will then be able to run through the game and earn all those trophies (and a fresh platinum trophy) all over again.

The Spider-Man remaster will be bringing across all of the enhancements that Insomniac have made to the game engine and the game assets to take advantage of the PlayStation 5. This means that the game will feature higher detail game characters for Peter Parker and others, it will also feature ray tracing and other enhanced visual effects, and the game take advantage of the console’s SSD, 3D audio and DualSense controls.

Clearly the remaster and the Ultimate Edition in general is geared more towards newcomers to Insomniac’s take on the Spider-Man universe, giving those that haven’t played the game on PS4 a way to start from scratch but also have next-gen finery. I’m sure that some people will be tempted to pick it up to replay the original adventure, but it’s a slight shame there’s not at least the option to import a save. After all, while not confirmed, you would have to expect that saves will transfer between generations for Miles Morales, and all the other cross-gen games. Spider-Man’s status as a separate remaster likely has some backend implications for how Sony’s consoles handle save files.

Speaking of which, last week’s announcement also revealed that Spider-Man: Miles Morales was a cross-gen game, coming to both PlayStation 5 and PlayStation 4, with an upgrade path to next-gen. It was a surprising turn of events, considering the tone of Sony’s statements about their first party games over the past half year, but a welcome one for those unable to upgrade at this time to be able to still enjoy some of Sony’s upcoming games.

You can read our full review of Marvel’s Spider-Man here.